Welcome 2018! Happy New Year and thank you for making Perodua your no. 1 choice! Perodua Promotion in this 2018 to bring a happy new ride!

Happy New Year with a happy new ride! Perodua is offering great deals and low interest rates for Axia, Bezza and Alza. So, come and pay us a visit at the nearest Perodua showroom to find out more about Perodua Promotion 2018. Find out more info at HERE. 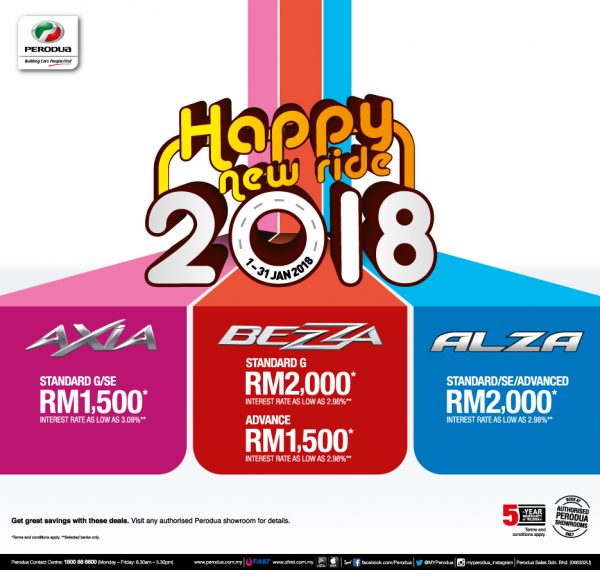 Perodua is offering RM1,500 rebate for Perodua Axia both standard G and SE version. The interest rate is as low as 3.09% for selected bank.

For Perodua Bezza, you can get the interest rate as low as 2.98% for selected bank. Besides that, if you purchase Bezza Standard G, you can get a rebate of RM2000 while Bezza Advance will get a rabate of RM1500.

In additions, Perodua Alza also giving RM2000 rebate promotion with the interest rate as low as 2.98% only. Perodua promotion is only for selected bank loan.

Promotion valid during January 2018 only. Terms and conditions might apply. So, visit any authorise Perodua showrooms for details.

At Perodua, we are constantly looking at what’s most important to you and making that most important to us. Quality. Reliability. Safety. These are just some of the things we take pride in providing all our drivers. Because you matter most.

The Perodua Axia is a five-door hatchback and it launched on 15 September 2014 as the successor to the Viva. The car takes over the title of being the most affordable car in Malaysia from the Viva. The Axia is the first model to début from Perodua’s all-new second factory in Rawang, Selangor.

The Perodua Axia has been crash tested by the New Car Assessment Program for Southeast Asia (ASEAN NCAP), and has claimed a 4-Star rating, thus becoming the second Perodua model to score a 4-Star rating after the Alza. The Axia is also safer than the 3-Star rated Myvi, despite being a smaller car.

The Perodua Bezza is an A-segment sedan. It was launched on 21 July 2016 as Perodua’s first sedan car, and a complement to the Axia hatchback. The Bezza is based on the Axia’s platform, and is powered by the latter’s 1.0-litre engine, in addition to a new 1.3-litre plant. Further more, the Bezza is Perodua’s first major in-house design. Perodua lead the styling and development of the Bezza’s upper body structure, with technical support from Daihatsu.

All Bezza variants are equipped with an anti-lock braking system (ABS) with electronic brake distribution (EBD), twin SRS airbags (for the driver and front passenger respectively), and twin rear reverse sensors as standard.

The Perodua Alza is a B-segment MPV. It was launched on 23 November 2009 as the company’s first purpose-built MPV. The Perodua Alza is based on the Daihatsu Boon Luminas platform, and is powered by the 1.5-litre 3SZ-VE DVVT engine.